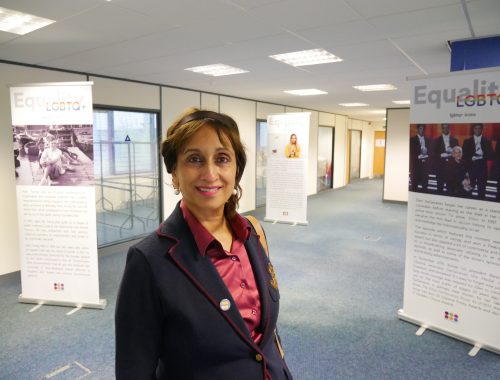 Thursday the 11th of October saw the 30th anniversary of National Coming Out Day,  an event which we celebrated by a holding a grand opening of the LGBTQ+ exhibition which we are delivering in partnership with the Equality Council UK in Aberdeen.

October is also Black History Month, and in addition to being home to the LGBTQ+ exhibition, Craigievar House also features a compelling exhibition on racial history and the depiction of race in media over the past few decades, which has been subject to radical changes.

To celebrate the theme of equality, local artists exhibited their work at Craigievar House. Jennie Milne, a documentary and portrait photographer, supplied touching photographs from a project named ‘Fragments That Remain’, which documents the lives of survivors and descendants of those displaced by World War Two in Europe. The project has brought Milne face to face with the past and its impact on the present, and has highlighted the importance of efforts to support and uphold equality, such as the exhibitions displayed at Craigievar House. 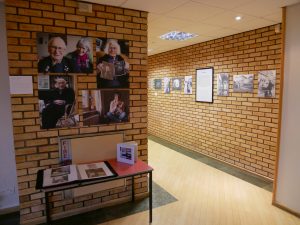 Isla Goldie, who is a local portrait photographer (as well as one of the two attendants who look after the building and the exhibitions there) also displayed some stunning work. Goldie’s project, named ‘Souls of Sonder‘ , is a “tip of the hat to the human race and their passing through time” and is composed of photos which show the wonderful architecture of Aberdeen and the frantic rush of its citizens passing through.

Kara Isabella Shepherd‘s  remarkable photography showing the remnants of apartheid in South Africa was also on show. To us here in the UK, the segregation which was so prevalent historically is often all too easily forgotten, and Shepherd’s work provides a vital reminder that until surprisingly recently, attitudes which are now hidden behind closed doors were out in full force.

Several beautiful handmade ceramic birds were also on display. These were prepared by refugees and were previously on display at the Sunnybank Community Centre. Each one is decorated with words and pictures by the hand of refugees new to the city, and one of the quotes reads; “when I came to Aberdeen for the first time, I saw a grey city with cold and windy weather. After a few months I found many good many ships, beautiful spring with a lot of things in Aberdeen, beautiful sea with daffodil and a lot of community with many facilities for helping international people” – Farak from Iran.

A journalist from That’s TV also attended, and interviewed Navrita Atwal who is Chief Executive of the Equality Council UK. This interview should be available in the coming weeks.

The Equality Exhibition in Aberdeen is now open Monday through until Thursday each week, from 9.30am until 2.30pm at Craigievar House, Howe Moss Avenue, Kirkhill Industrial Estate, Dyce, Aberdeen. No booking is required.