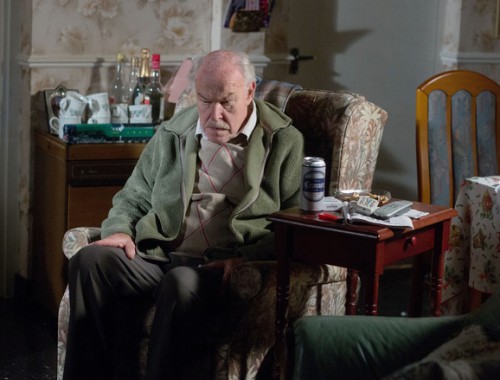 In a plot line hailed as a potential ‘lifesaver’, Albert Square’s quick witted granddad, Stan Carter, revealed that he has been wrestling in secret with one of the UK’s biggest man killers. In recent tense scenes, his family learned that Stan – played by leading British actor Timothy West CBE – had kept mum about being diagnosed with prostrate cancer, which kills one man every hour in the UK.

Specialist nurses from men’s health charity Prostate Cancer UK, which has been making a splash with its Men Utd Campaign, which supports men like Stan, with the disease and funds research, has praised the storyline, which it believes could give a real boost to ensuring prostate cancer is not only on the political agenda, but the radar of every man.

Prostate Cancer UK is determined to ensure men get a better deal when it comes to their health, and is commending EastEnders for giving centre stage to a disease which lingered in the shadows for too long.

When EastEnders first hit our screens 30 years ago, prostate cancer just wasn’t talked about. It was a dirty little secret ‘down below’. Treatment options were extremely limited and survival rates were terrible. Things are getting better, but we have a way to go. Some men, like Stan, are reluctant to talk about prostate cancer, and reach out for help – but the scriptwrites at EastEnders are helping us to break down the biggest taboo around men’s health