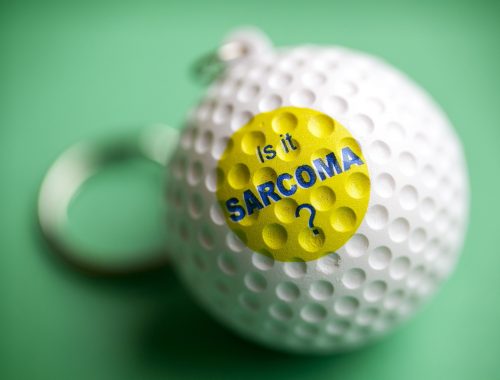 Sarcoma is a relatively rare form of cancer that can develop in muscle, bone, nerve tissue, cartilage, tendons, blood vessels, and the fatty and fibrous tissues. Whilst sarcoma most commonly affect arms, legs, and the trunk, they can affect almost any part of the body, inside or out. There are many different classifications of sarcomas, which occur at different rates. Bone sarcomas, for example, affect less than 500 people annually in the UK each year– making It a very rare form of cancer, whereas soft tissue sarcoma affects around 3,300 people annually.

It is estimated that there are around 100 different sub-types of sarcoma, but in total sarcoma only makes up about 1% of all cancer diagnoses. Unfortunately, due to the rarity of sarcoma, it can often be difficult to find information about the condition and, at time, even harder to treat. Sarcoma survival rates have not changed much over the last 12 years, despite major changes to these rates in other forms of cancer. It is a difficult cancer to treat and early diagnosis is often the key to a positive prognosis; yet national awareness of sarcomas remains relatively low. In 2015, a study found that only 53% of participants had ever heard of Sarcoma, with only 23% of those that had heard of it knowing it was cancer.

To remedy this, Sarcoma Awareness Month and Sarcoma Awareness week were born. Running annually in July, a number of charities across the UK including Sarcoma UK and Sarcoma Alliance run high-profile awareness and fundraising events throughout this month. Every year the publish guidance on how you can get your own knowledge out and inform others too:

At Centric, we believe in the spirit of community (the clue is in our name!), and believe that even the smallest of gestures can make the biggest difference. Join us for this month in our effort to raise Sarcoma awareness.