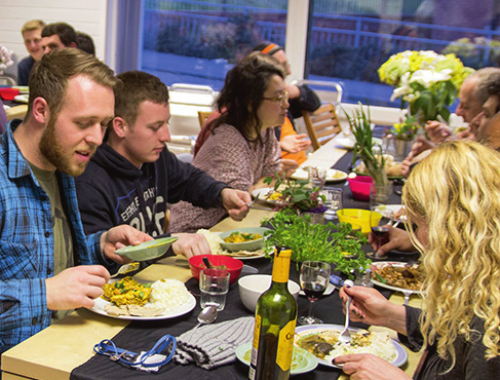 Chef turned food-interceptor Adam Smith is not kidding when he says he wants to feed the world. Here’s how he plans to do it…

Adam Smith is sick of seeing courgettes. There are four allotments around the café he has setup in Armley, Leeds, and box after box of surplus courgettes show up on a daily basis. ‘There’s hundreds of them all over the kitchen.’ He’s brought this on himself. In December he set up The Real Junk Food project, a concept he honed whilst working as a chef in Australia and brought home to set up. ‘Our main aim is to abolish food waste,’ he explains. ‘We want to intercept food that’s going to be thrown out and either compost it or cook and serve it in our café, depending on its deterioration levels.’

Adam works alongside four other co-directors: Sam, Connor, Juan, and Johanna, Adam’s partner with whom he has a seven-month old son. There are also hundreds of volunteers involved in the project. It’s a Community Interest Company, and any money made is ploughed back into the business with Adam living off £89.50 per week in working tax credits. Together the team have formed what Adam calls ‘an organic network’, linking up with markets, restaurants and supermarkets. They intercept perfectly edible food bound for landﬁll. There’s lots of it, a frightening amount in fact. So much that the café can’t keep up. ‘At the minute wedon’t even have to go out and look for food, pretty much the whole of the Leeds catering industry now knows what we’re doing so there’s no excuse for disposing of any food.’ Adam explains how a local wine company showed up on Saturday with 100kgs of bottled cordial. Another time Waitrose were about to throw away 600 boxes of eggs because they had mistakenly marked the use by date before the display until date. ‘They rang us, we turned up in our van and took them away. Sam and Connor have developed working relationships with local supermarkets from their dumpster diving.’ Yes, dumpster diving: the process of recovering food (usually sealed and boxed) from bins. ‘It’s something they started doing at uni to save money.’

Since March the café has intercepted some 15 tonnes of food destined for landﬁll. Adam talks rapidly and passionately about the amount of food waste he’s encountered and what he’s been doing with it. ‘The ﬁgures are astronomical.’ Once a dairy distribution company had 1.2 tonnes of butter they were planning to discard in 250g blocks. There was so much that the Junk Food Project could only take 56kg. ‘They do that every week, probably on a daily basis. It’s cheaper for them from a business point of view, it would cost more to employ someone to sort out the waste than it would for them just to dump it.’ It’s estimated that around half the food we produce goes to waste, a shameful fact given 925 million people in the world don’t have enough food to feed themselves properly. By 2025 the global population is estimated to hit nine billion with some calling for the need to double the amount of food grown and made on the planet. ‘It’s an absolute nonsense. There’s enough food grown and made on this planet to feed everyone twice over,’ argues Adam. ‘It’s distribution that’s the problem.’

Adam and the team are trying to bridge the gap. A pretty incomprehensible task, but they’re making progress. The food they intercept is cooked and served in the café where diners eat on a pay-as-you-feel basis. People don’t even have to part with cash, they can volunteer to help with jobs like washing up and serving. ‘Every single person who walks through my door has access to a meal. We have a food boutique here too which is a registered food bank. People can come and shop with us, take what ingredients they like and use them at home.’

The café has become a vital part of the Armley community, an area west of Leeds city centre that Adam describes as a ‘social dumping ground’. Playwright Alan Bennett was born here in 1934. Today it’s regarded as one of the most socially isolated places in the country. ‘There’s a prison right on the doorstep of the café, we deal with a huge inﬂux of asylum seekers. We’ve got the highest suicide rate in the whole of Europe among men aged 18-30, the next town has the highest needle exchange clinic in the whole of Europe. We’re dealing with everything.’ In the nine months they’ve been open, the café has literally fed the 5,000: that’s the number of people who have eaten at the café to date.

One of the ﬁrst ever visitors was Mark Baber. ‘He walked in and said he had no money, no food, no electricity and was on the verge of suicide. He lived in the high rise ﬂats opposite the café and was planning to throw himself off.’ The project fed him and he began volunteering. Without the burden of worrying where his next meal was coming from Mark turned his life around. Getting to know him, the team discovered he was a painter and began displaying his art in the café in return for serving him meals. People began buying it and the team held an auction online. Media coverage reached New York and Australia and there was enough interest for the team to arrange a charity exhibition at the start of September where 50 of Mark’s paintings went on display at the Left Bank in Leeds. ‘Mark tells people quite openly that if the concept hadn’t been there, he doesn’t think he’d still be here,’ explains Adam.

This is not simply a soup kitchen though. It’s a characterful and cosy café, the same as you might ﬁnd in many towns across Yorkshire. The only giveaway is the fact there are no menus, just a blackboard where choices are chalked-up based on what food has been intercepted that day. ‘A few months ago we served a honey and soy smoked mackerel salad, with pink grapefruit and monkﬁsh caviar. There’s now homeless people from Leeds who’ve experienced caviar, they’ve been able to do that through food wastage. We intercepted ﬁve jars that were being thrown away unnecessarily by a supermarket – the expiry date was March 2015.’ All dietary requirements and allergies are taken into consideration at the café (Adam is gluten-free and vegetarian himself). Generally there will be a big pot of stew or curry on the go, with lots of smoothies, fruit salads and crumble desserts available to order too.

Everyone from students to the rich and famous have dined at The Junk Food Project. Co-director Connor is the son of David Walsh, chief sports writer at The Sunday Times, the key journalist in exposing Lance Armstrong’s doping programme. David brought some special guests to Armley on the eve of the Grand Départ. ‘We had three-time Tour de France winner Greg LeMond here. He was probably one of the most in-demand people in Britain that weekend and he was with us in our café.’ For one of the courses that night LeMond, his wife and 15 others were served French cheese that the group had found in a Waitrose bin. ‘We told them. It was ﬁt for consumption, still in its wrappers, it had been put in a plastic bag then into a bin. They loved it.’

It’s still difﬁcult to get your head around the fact that food is being taken from bins and put on plates. Adam doesn’t have any issue with this. ‘As human beings we can tell when something is safe to consume using our senses: smelling things, tasting things, seeing things. For example if we make a fruit salad and it starts to ﬁzz or tastes citrusy or sherbety, it’s off and you don’t eat it. You don’t have to be a scientist.’

The Junk Food Project are also available to hire for outside catering, recently they fed almost 3,000 staff at an event for O2. ‘Our only condition is that we’re allowed to demonstrate who we are and what we do.’ They also put on workshops in schools where they teach children about food waste. ‘We went to a school recently and showed the children some peaches and these kids had never seen them before. I’m talking about youngsters who are ten years-old.’

Tapping into the expertise of people who eat at the café is something else the Junk Food Project do. They use the space to host workshops, offering everything from arts and crafts to jam making and even stone masonry. ‘We met a qualiﬁed stone mason, Tony. He has 45 years experience but is on the verge of homelessness, yet he has a skill that I don’t know anyone else who does. Hopefully he’s going to help teach some of the kids how to build dry stone walls.’

The bigger picture is to roll Adam’s model out across the rest of the country – and the world. He’ll send the Junk Food Project’s business plan to anyone interested in setting up a café of their own that intercepts food waste. They’re free to use it however they want. Today there are 20 cafés using his model across the UK. ‘A social investor emailed me this morning, he wants to set up 40 or 50 in London. We’ve had offers from Zurich, Cape Town, and Warsaw. We had two last week from LA and Memphis. It’s getting massive. We’re empowering people by saying “This is how we did it, follow our guidelines and do it for yourself.”’

Just how far does Adam want to take this? ‘I want to feed the world – do you know how many people laugh at me when I say that? I want to show people how they can do what we do. Between us we can feed the world. That’s the only way it’s going to happen. I haven’t even started yet.’