Home News The Homeless Heroes of The Manchester Attack
Share this page:

The Homeless Heroes of The Manchester Attack 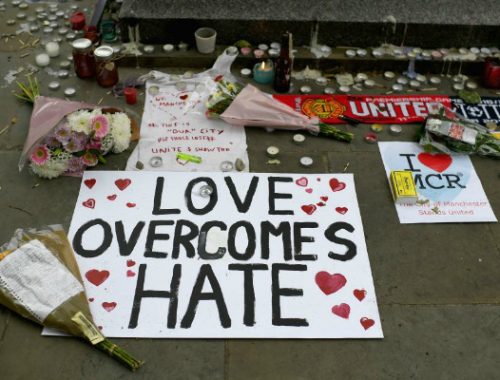 The bombing at the Ariana Grande Concert at Manchester Arena on the 22nd of May 2017 left Manchester, the rest of the country, and the world reeling.

The attack caused 119 people to be injured, and 22 people died.

The direct aftermath of the event was a credit to the community of Manchester; people did whatever they could to help. Social media was flooded with offers of transport and shelter, local people and taxi companies offered free lifts and accommodation via Twitter to those left stranded at the concert and a nearby hotel served as a shelter for children displaced by the bombing, with officials directing their parents there. Shelter, warmth and food was offered by Manchester’s Sikh temples, local homeowners, hotels and venues.

Friends Chris Parker, 33 and Stephen Jones, 35 were nearby Manchester Arena when the bomb detonated. Ignoring first instincts to run away from the scene, they were extremely brave and entered the arena to try and help people. Chris dressed a child’s wounds using clothing that was due to be sold as merchandise, and also held a 60 year old woman as she died from her injuries. Stephen has shared stories of helping with graphic injuries, and was especially focused on helping the children affected by the attack and trying to lessen their pain. 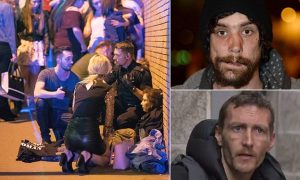 Chris (top left) and Stephen (bottom right), two of the ‘homeless heroes’ who helped after the attack.

Since this event, Chris and Stephen’s efforts and bravery have been widely praised. Two appeals have raised over £50,000 to help Chris and Stephen has been accommodated in hotels and is choosing a place to call home, which will be funded for at least 6 months by a sponsor.

Coffee 4 Craig, a local homeless charity, issued a statement the day after the event praising the efforts of Chris, Stephen and many other homeless people, who were “helping the walking wounded and holding the hands of lost ones helping them to safe spaces”. 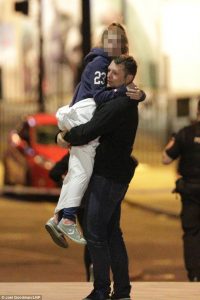 Coffee 4 Craig is named after Craig White, a formerly homeless man who was 37 when he died on the streets of Cardiff in 2013. Craig had been struggling with mental health problems, and was left homeless after the breakdown of a relationship. His older sister Risha Lancaster received the news of his passing over the phone, and learnt that he had died alone, sleeping in a car park.

Following this traumatic event, Risha decided to do something in Craig’s memory, and alongside her husband Hendrix, began to support the homeless people of greater Manchester and South Wales. At first, they handed out coffees and encouraged others to give out hot drinks and tell homeless people it was from Craig, but shocked by the terrible conditions and lack of support faced by the homeless in the area, Hendrix soon had ambitions to provide longer term help and support. Now, a charity has been founded in honour of Craig; Coffee 4 Craig. Risha and Hendrix, along with a team of supporters and volunteers, now run a street kitchen and distribute donations to people in need.

If you wish to donate to Coffee 4 Craig and help to support the homeless heroes of Manchester, click here.